I was sitting with my mother-in-law one day and we were discussing people in general. She started talking about talents and intelligence, and then she said something that stuck with me. She said “Too many people are trying to impress others, rather than be impressed by others” My mother-in-law doesn’t like to talk about herself. She is a retired teacher. Not just any teacher, an extremely gifted special education teacher. She was recognized for her talents and asked to head the department for the whole state! She made a difference in the lives of thousands of children and their families over her career. But she will rarely talk about her accomplishments. Instead, she’ll spend her time praising what she’s learned from other teachers. When she’s around other people, she’ll brush off her own stories and ask about theirs.

“Too many people are trying to impress others, rather than be impressed by others”.

We as people are so desperate for the attention and approval for other’s that we lose focus on what is important. We think if we can impress others enough, maybe they’ll like us more. I’m not saying don’t ever talk about yourself, your accomplishments, or your dreams. What I am saying is that we have to be careful of where our focus lies. Is our focus to make other people impressed with us? If we are to practice true hospitality, we have to remember that true hospitality happens when our guests leave our home feeling better about themselves, not better about us. If we only seek to impress those around us with the things we’ve acquired, or what we know, we’ll never be effective in loving them or being a blessing to those that we bring into our home.

Today’s culture places such a high importance on self, selfies, and self care. While we should certainly be taking care of ourselves, we need to realize that this world doesn’t revolve around us. If you’re reading this, then you’re probably wanting to be a blessing and influence to others. You want to be interested. The following 5 tips helps us understand how we can be more interested in others, instead of interesting for others.

A good listener doesn’t listen to respond. They listen to learn. If you want to be a good listener, don’t start thinking about what you’ll say next before the other party has even finished their sentence. Listen to what they’re saying, think about the words and tone they’re using. And remember, not everything requires a comment. Sometimes, listening is your only job.

2.) Reign in the urge to one-up every story you hear.

It could be completely innocent, but resist the urge to tell a similar story after you hear about a situation. Even ones that start off with “that reminds me of…”. It’s ok to do this in moderation (if your motives are pure), but if you do so after everything the other party says, it will seem like you’re trying to one-up them. No one likes someone trying to outdo their every word. Just be aware of the conversation and your own intentions.

Flattery is saying something to someone’s face that you would never say behind their back. If you think their dress is hideous, don’t tell them it’s lovely. If you think they’re dreadfully boring, don’t tell them they’re the most fascinating person you’ve ever met. If you really think that cake tastes appalling, don’t make a big fuss and ask for the recipe. The Bible tells us in Proverbs “Those who flatter their neighbors are spreading nets for their feet.”

When you are in a conversation with someone, try to eliminate distractions. Don’t focus on what’s going on around you, instead focus on the speaker. And for Heaven’s sake, don’t keep looking at your phone. Things you can do to let your speaker know that you are 100% focused and interested in them: make eye contact, lean in to the conversation, avoid crossing your arms, and use engaging facial expressions.

If we can learn to be interested in others, we will not only have a bigger influence in their lives, but also be a blessing and encouragement to them on their journey. I think it’s so important to question our motives, and re-adjust our focus when entering in to a conversation with others. 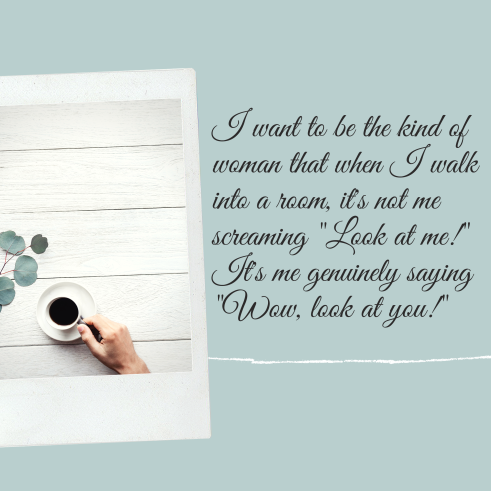 Don’t think this means you can’t ever show off something neat you found, share information you have, or post pictures on social media. Some people will read this and second guess every Instagram picture they’ve ever shared. That’s not what I’m talking about. Below I’ve shared a few things I like to ask myself before I share, whether in person or online.
1.) Is it true? If it’s true, then is it yours to share?
2.) Is it educational, encouraging, or edifying?
3.) Will this improve someone’s day or brighten the world around me?

I would love to hear your thoughts about being interested versus interesting! Leave a comment below or email me here!

My name is Paige Baldwin. I am a Christ follower, wife, blogger, and nurse living in a St. Louis suburb with my wonderful husband. My passion and ministry is hospitality, and my hope is that through my life others will come to know the love of Christ. View all posts by Paige Baldwin